LMEprecious is traded on LMEselect, the LME’s electronic trading venue, and the inter-office telephone market. Trades on LMEselect are automatically and immediately cleared by LME Clear at the time the trade is executed. (On LMEselect, trades are executed at the time two orders are matched in LMEselect; on the inter-office market, execution occurs when trade halves are entered into the LME’s matching system, LMEsmart.)
Gold and silver are available for trading on a daily basis, from T+1 (TOM), T+2 (SPOT), through to T+25. LMEprecious also offers monthly dates for at least 24 months (third Wednesday prompt dates) and then quarterly dates out to 5 years, as defined in the LME Rulebook.
In order to maximise on-screen liquidity and keep barriers to entry low (in terms of market data bandwidth required) we offer a refined daily date structure on LMEselect. Gold and silver are tradable on LMEselect for T+1 (TOM), T+2 (SPOT), T+3 and then all the monthly and quarterly dates as described above and defined in the LME Rulebook.

A ‘prompt date’ is the settlement date of a future or forward contract. This term is synonymous with the term ‘value date’ commonly used in the OTC precious metals market.

On LMEselect the tick size for gold outrights is $0.10 and for silver outrights is $0.005. In the inter-office market the tick size for gold is $0.001 and for silver is $0.00001.
There is a separate order book for calendar spreads with increased granularity. On LMEselect and in the inter-office market the tick size for gold spreads is $0.001 and for silver spreads is $0.00001.
On LMEselect the contracts are available to trade from 01.00-20.00 (London time) for all prompt dates except TOM, which is available to trade from 01.00-16.00 each day. The inter-office telephone market is open 24 hours a day for all LME products.
For the monthly outights the combined trading and clearing fees will be $0.50 for house trades and $0.90 for client trades. There are further discounts including for Spot, Tom/Next and interoffice trades. A full fee schedule can be found on the LME website.
Yes, existing LME members have the option of either a separate trading mnemonic, or they can use their existing trading mnemonic.
Yes, the LMEselect GUI is available for LMEprecious products, although special consideration will be needed to accommodate the high level of LMEprecious order book activity anticipated, which could affect capacity and performance. Separate GUI logins are required for LMEprecious and LME base metals, and it is not be possible to access both sets of products at the same time from a single instance of the GUI. If simultaneous access is required, separate instances of the GUI software on separate hardware are needed to ensure adequate capacity and performance. GUI usage recommendations for LMEprecious are outlined in an LMEselect GUI guide on our website.

a. two clients of the same member in LMEselect trading with each other legitimately through order routing on the API; or

b. an in house trader trading with an in-house trader (both of the same member) on the API; or

c. an in-house trader trading with a client through order routing on the API.

The current approach for LME base metals is that such transactions are suppressed in LMEselect so that they do not flow into LMEsmart. This suppression functionality is not available to members for LMEprecious. The LME is aware that there are a number of legitimate trading scenarios whereby a member may take both sides of a trade in LMEselect, and so it would not be appropriate to restrict such activity. Where such activity does take place, members should be aware that the resulting transactions will flow automatically from LMEselect to LMEsmart, and from there to LMEmercury, where the transaction will be cleared and published to the market. Members are reminded, however, to ensure that they have appropriate controls and procedures in place to prevent any inappropriate self-matching of orders in LMEselect.Note – the approach for LME base metals is currently under review and further communications may be made on this in due course.

With significant order book activity expected, LMEprecious market participants should ensure that they plan for sufficient bandwidth both within their own systems and through LMEnet to access LMEprecious products, and are recommended to undertake a review of bandwith requirements at least quarterly. We advise members who wish to access LMEprecious to ensure they have at least a 10Mb connection; in the event that bandwidth capacity is exceeded, either through bursting or a sustained level of peak traffic, then members may experience delays in the receipt of market data and could, in certain circumstances, experience temporary disconnections.
Market data vendors should plan for sufficient bandwidth in their own systems and through LMEnet. Specific information relating to LMEprecious for market data vendors is contained in relevant notices available from the Market Data Team at the LME.
We have partnered with a number of industry participants who have committed to provide liquidity, creating a tight and liquid order book down the curve from day one. This means there will be quotes down the curve providing liquidity to execute orders, roll positions and close out existing positions where required. For more information on LMEprecious market making, including the price streaming commitments for gold and silver, please refer to LME Notice 17/229.
A list of ISVs offering LMEprecious is available here. We will continue to update this list as ISVs confirm readiness for LMEprecious.
LMEprecious will be adopting a T2-style trade-booking model, similar to other major futures exchanges. For LMEprecious a client trade can be booked directly into the relevant ISA/OSA account at their LME clearing member, removing the need for an extra ‘client cross’ from the clearing member’s house account. For the avoidance of doubt, the change in booking methodology does not impact the legal contractual framework of the LME.
Members are able to fill a client order off their own book and enter the trades into matching as inter-office trades.
Matching closes at 20.15 London time for all prompt dates except TOM, for which it closes at 17.00. Trades on the inter-office market must also be entered into matching within the matching deadline (10 minutes) as further set out in consultation notice 16/361 : A354, subject to transitional provisions until January 2018.
Initial margin is calculated using the existing SPAN algorithm and valued on a Realised Variation Margin (RVM) basis, to allow trading profits to be easily realised.

The margin values for precious and existing base contracts will be contained in the same SPAN file.

Yes. LME Clear provides a margin offset, which is currently 60%.
Yes, LMEprecious members require a separate clearing mnemonic for precious metals.
Yes. This decision was based on member feedback and ensures members can retain a choice as to whether to be exposed to base metals and/or precious metals.
Daily settlement prices are determined using a waterfall methodology, Volume Weighted Average Price (VWAP) approach, based upon LMEselect trading activity during a relevant settlement window and/or other relevant data, where appropriate.
Delivery will take place via the existing London market infrastructure. Settlement is on a net account basis with transfers of unallocated gold made between the clearing member’s unallocated loco London precious metal account and LME Clear’s unallocated loco London precious metal account, as described below.
LME Clear will pass on a fixed fee per debit or credit of unallocated gold. This is currently $5 per transfer. This is a fixed fee per transfer regardless of the number of lots. 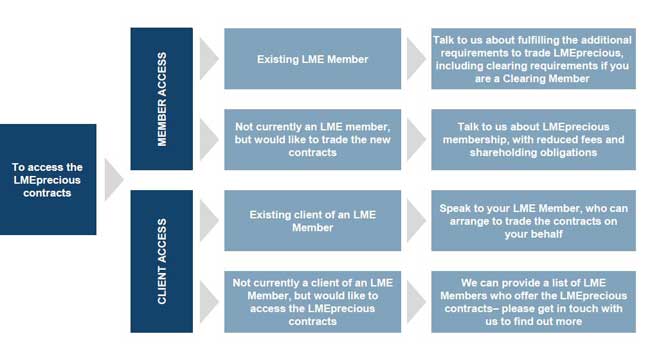 Relevant contact details can be found at LPMCL’s website. LPMCL is the organisation that coordinates the London unallocated delivery process.

Clients should contact their LME clearing member to confirm if they are offering LMEprecious clearing services. Clients who are new to the LME can find a list of LME clearing members offering LMEprecious on the LME website. This list will be updated regularly, so please let us know if your preferred clearer is not yet listed.
This will be at the discretion of the GCM. Clients may be required to open their own loco London unallocated account if they don’t already have one.

An OTC gold derivative contract will not automatically become subject to the reporting requirements under EMIR because LMEprecious contracts are available for trading on the LME (a regulated market).

An OTC derivative contract is reportable under Article 9 of EMIR if it falls within the definition of "derivative contract" under the Markets in Financial Instruments Directive ("MiFID") or, from 2018, MiFID II. A gold derivative could fall within the scope of the current MiFID definition if it: (i) can be physically settled; (ii) is not traded on a regulated market, MTF or OTF; (iii) is not for commercial purposes; and (iv) has the characteristics of other derivative instruments (such that it would be a financial instrument falling under category C7 of the Annex to MiFID). Under MiFID, an OTC derivative is currently able to fall within the C7 category if it is "expressly stated" to be equivalent to an exchange-traded contract. Consequently, an OTC gold contract could currently be reportable under EMIR if it is expressly stated to be equivalent to an LMEprecious contract.

However, when MiFID II is implemented in 2018, a physically settling OTC commodity derivative will be capable of being a derivative contract under category C7 (and therefore reportable under EMIR) if it is "equivalent to a contract traded on a regulated market". It will no longer be necessary for such equivalence to be "expressly stated". In order to assess equivalence, it will instead be necessary to consider the features of the OTC contract, including the price, the lot, the delivery date and other contractual terms, including the quality of the underlying gold and the place of delivery. An OTC contract that is closely matched to the features of an LMEprecious contract could therefore be capable of being treated as a reportable C7 contract, on the basis that it would be equivalent to an exchange-traded contract. However, an OTC contract that differs in material respects from the LMEprecious contract ought not to be treated as a C7 contract simply because LMEprecious contracts are available for trading on the LME.

For example, all LMEprecious contracts use LME prices for the purposes of settlement; an OTC gold contract that uses a different settlement price would therefore operate differently from an LMEprecious contract, with different results for those trading in it. Given that price is an important factor in determining equivalence, such a differently priced contract should be materially different from, and therefore unlikely to be equivalent to, the LMEprecious contract. A firm that is considering whether a particular contract is reportable under EMIR will need to consider whether there may be other reasons why the contract might be reportable, taking into account all the circumstances relevant to that contract.

You should note, in addition to the disclaimer on this website (which also apply to this answer), that the position described in this answer reflects the LME's understanding of the relevant regulatory requirements as at September 2017. It is not legal or compliance advice and the LME does not intend or expect reliance to be placed upon it by any person. Firms should take their own legal advice as to the applicability of regulatory requirements (including the EMIR reporting requirements) to their transactions and business activities.