Chinese and London metals markets might be thousands of miles apart, but they are connected by trade flows as the difference in prices on both markets can incentivise imports and exports of metal. This leads to arbitrage activity between the two markets, which itself is evolving beyond physical participants to more screen-based activity. This has lead to more volatility on the LME market during the morning session, but the robust and physical nature of the London market means the afternoon officials and closing prices remain a true reflection of global metal market conditions.

The fundamental price distinction between the London Metal Exchange (LME) and the Shanghai Futures Exchange (SHFE) is grounded in the physical markets. The arbitrage is a comparison of the regional Chinese price – captured by SHFE’s solely Chinese delivery network – with the LME’s global price, supported by its network of warehouses worldwide (excluding China) which can be used for the settlement of an LME contract.
The SHFE-LME arbitrage for a base metal typically follows the regional Chinese physical premium, which is a survey price of metal physically bought and sold locally in China (Fig 1). Therefore, although other factors certainly exist, the differential of the SHFE-LME arbitrage is fundamentally priced in the physical i.e. the supply-demand balance and actual transportation costs connecting the two markets. 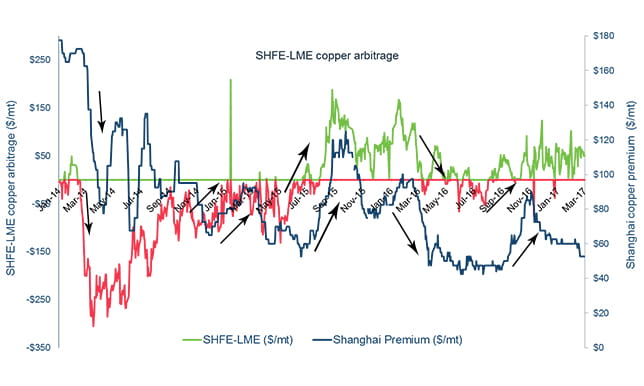 As markets have globalised, SHFE-LME arbitrage activity has evolved beyond just physical merchants that might profit from trading cargos on the different geographical prices. Pre-07.00 London volumes (pre-15.00 Shanghai), so called “Asian hours”, have grown substantially across the LME metals contracts in recent years. A network of on-screen traders has developed to connect and react to the price moves in both markets.
Most tellingly is the growth in the pre-07.00 activity of the LME Nickel contract. Prior to the launch of a nickel contract on SHFE in March 2015, the LME “Asian hour” trade for nickel averaged just 8% of total volumes. Since the launch of SHFE nickel, this has doubled to an average of 16%. It would appear, nickel has now overtaken copper as the “Asian hour” proxy for arbitrage activity. 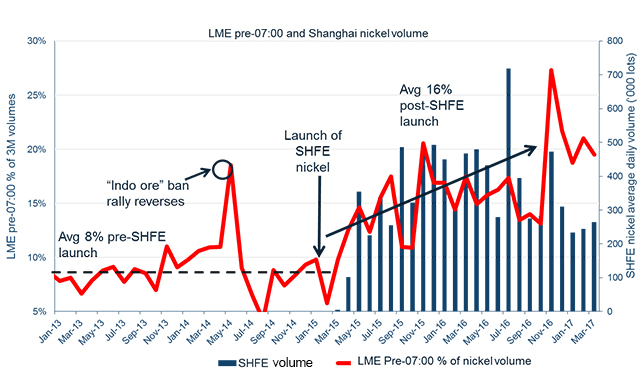 Whilst on-screen traders are a driver for this growth, the physical connection still underpins the arbitrage activity. For example, higher Chinese trade taxes have limited the pre-07.00 share of the LME Aluminium contract. Recently though, higher SHFE aluminium volumes might be starting to develop an arbitrage market, even with current taxes in place (see LME Insight, January 2017).The uncertain future of China’s lead and tin trade taxes could also be an interesting development for arbitrage activity in those markets.

Has this created more volatility?

Although there is evidence to suggest the growth of Asian participation on the LME, and the arbitrage opportunity with SHFE has seen greater price moves during the “Asian hour” session, the same cannot be said for the whole London trading day. Taking the more recent example of nickel, since the Shanghai contract launched, “Asian hours” trading on the London contract has lead to a higher price range. Before March 2015, price moves very rarely averaged above 1% whereas now they are more consistently in the region of 1.5% to 2.5%. 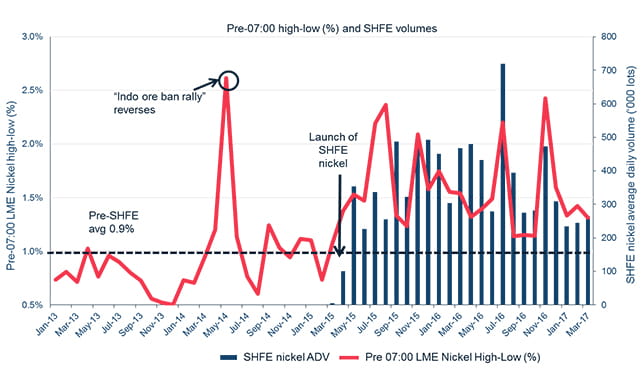 However, this effect is likely to be absorbed across the whole London trading day, which is more influenced by physical participants. Looking again at nickel, in 2016, LME Nickel's “Asian hours” trading volatility increased to more than 40% above what it had been prior to the launch of the SHFE Nickel contract. This increase in volatility levels has dropped to 25% in 2017. However, volatility across the whole London day started decreasing after 2015 and is now well within the range of normal levels seen prior to the SHFE launch. 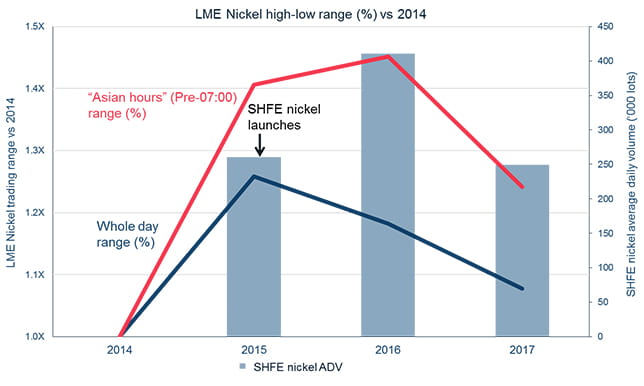 When thinking of cause and effect between the two markets and how much independent momentum Shanghai activity brings to the LME, a telling metric is the amount of trading actually taking place during China’s night sessions, when the local traders should be asleep.
For example, since the beginning of 2017, 50% of SHFE nickel volumes have traded during Shanghai night hours, which is actually the afternoon in London and after the LME official prices are set. This suggests that a high portion of these trades are trying to arbitrage and connect with the moves in London.
Therefore, the high volumes on the Shanghai market can still be said to follow, rather than to lead, the physical reference price, which retains its home at the LME. 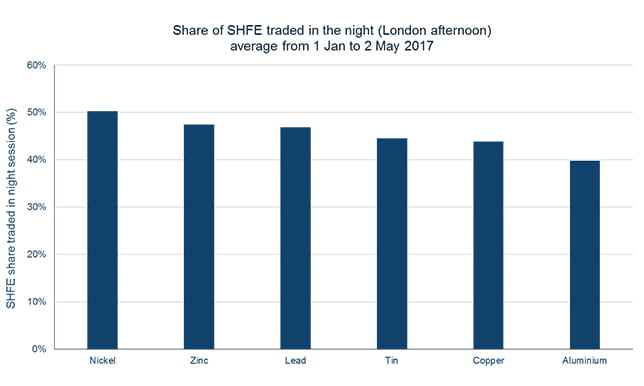