In previous LME Insight pieces we have looked at the copper arbitrage between the London Metal Exchange (LME) and CME, how the London and Shanghai metals markets interact as well as the increasing influence the East has on aluminium.  In this, our latest look at arbitrage, we explore the “arb” between the LME and the Shanghai Futures Exchange (SHFE). We will focus on copper and explore some of the considerations and pitfalls associated with the LME – SHFE arb trade.

Let’s remind ourselves what arbitrage is. Global commodity traders seek to identify and respond to supply and demand differentials between linked markets. The same commodity can trade at different prices on different futures exchanges. When these price differences occur, traders will often simultaneously “buy low” (ie cheaply) in one market and “sell high” (ie more expensively) on the other market. This is called the “arbitrage trade”.  As well as giving traders the opportunity to make a profit, arbitrage trading acts as a mechanism which ensures prices in linked markets do not deviate substantially.  Some definitions of arbitrage describe it as “risk-free”. That might be so in theory, but in practice, the LME – SHFE arb is anything but, with many factors to be considered.

In respect of LME – SHFE arbitrage, copper is one of the most commonly traded products. So, here we are using copper as the main example to illustrate how the LME – SHFE arb works and where the potential traps for lossmaking transactions are.

Why is copper so popular for arbitrage? There are a number of reasons: it has sufficient liquidity and inventory, favourable export levies, and fungible brands and shapes to name a few. But first and foremost you need correlation, or, to be more precise, non-correlation – which is why copper is particularly popular.

Copper prices on the LME and SHFE are strongly correlated (95.98%) but, as the below graph shows, sometimes price differentials do arise due to asymmetric information or fundamental disparities, giving rise to arbitrage opportunities. 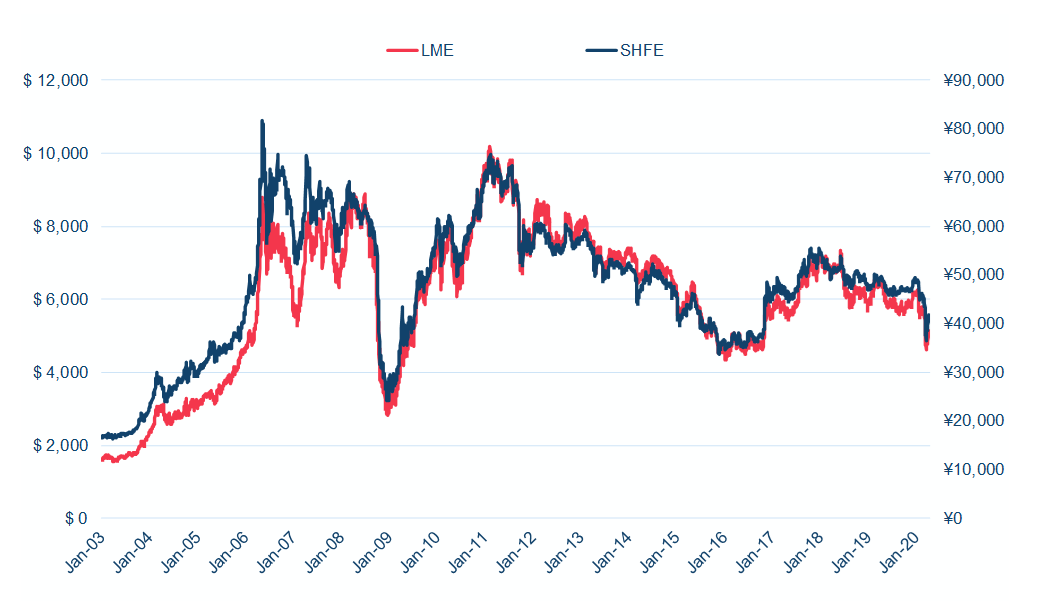 Regional differences in supply and demand, tax, exchange rates and freight charges, interest rates, and premiums and discounts can all contribute to price differences between markets.

NB: ADMIN RMB100 has been used in this example for ease, but the administrative charge varies from one company to another and can be anything from RMB80 to RMB150. 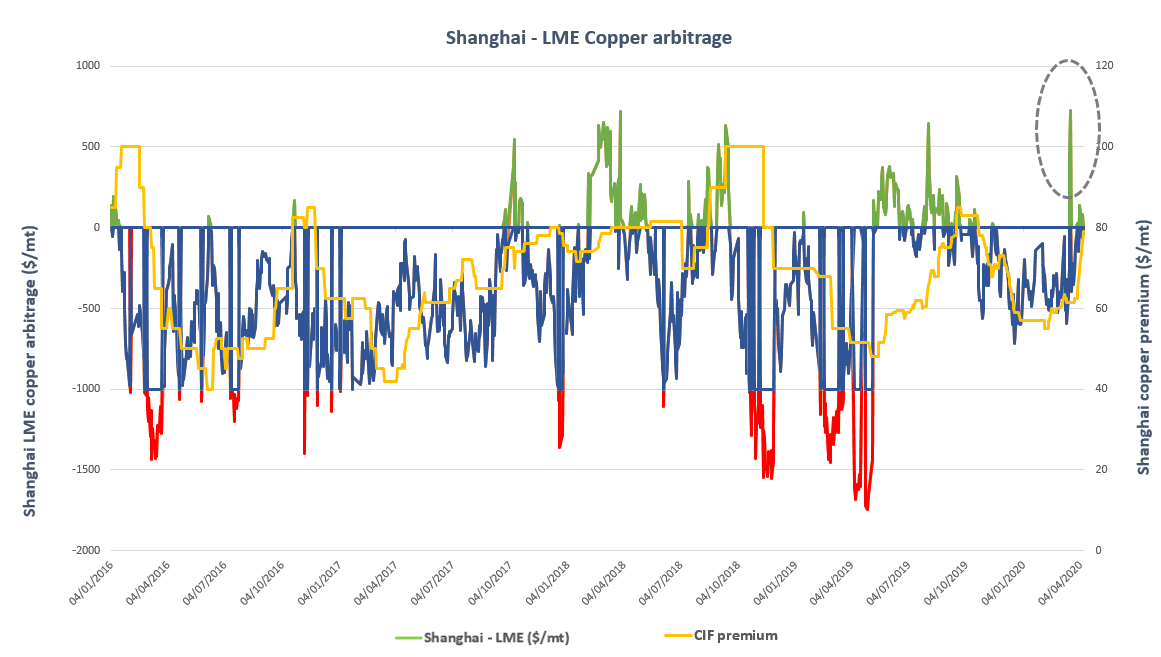 Although some traders may consider arbitrage to be a “low-risk” transaction, several factors should be considered before entering the LME – SHFE arbitrage trade. Some of these we will now look at in turn.

The Shanghai bonded warehouse is considered to be an additional international pool of inventory alongside LME, SHFE and CME warehouses. It balances the supply and demand between international and Chinese domestic markets. Bonded material can be shipped out to the international market easily or imported into China (after the 13% VAT is paid). The strategic location gives the Shanghai bonded warehouse a niche in which to move metals to wherever a more opportune physical premium exists, and to act fast.

The below chart shows stock levels across LME, SHFE and Shanghai warehouses, giving us an idea as to how material moves between the three venues. When global supply and demand is in equilibrium, stock movements between the three venues can indicate a regional fundamental imbalance. The increase in stocks in all three warehouses since the start of 2020 suggests the global market is in surplus. Bonded warehouses can act as a buffer too, smoothing irregular stock movements in LME warehouses, as demonstrated by the time period highlighted in the grey circle below: 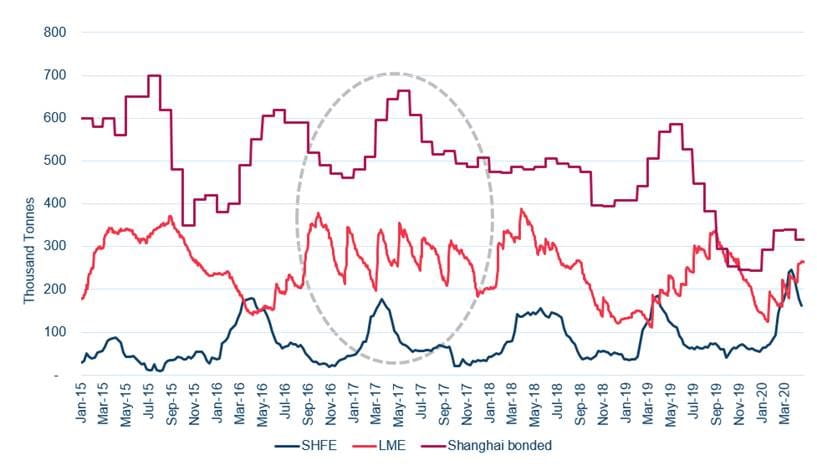 The Shanghai bonded warehouse holds a significant amount of copper with an average of about 500,000 metric tonnes (in the second half of 2019). This can facilitate the physical movement of metal to fulfil a shortage on one market and drive the price lower in order to close the arbitrage window.

Tax-rate changes can be announced unexpectedly, changing the economics of normal trades and arbitrage between markets. In April 2019, for example, China implemented a cut in VAT for the manufacturing sector from 16% to 13%. This was to help Chinese manufacturers who were struggling to compete due to US tariffs and a slowdown of global demand. From the announcement to the actual effective date, the arbitrage curve changed.

The pending tax cut would lower costs for importing forward cargoes, ie less duty would be applied. As a result, clients deliberately delayed imports in anticipation of the future change in tax. This increased short-term demand in the domestic market and therefore widened the backwardation structure. Hence, reverse arbitrage opportunities became available for some.

Another example of the impact of a change in tax rates can be found in the aluminium sector. China is the largest aluminium producer globally and the natural trading flow was selling in the international markets and then buying in the domestic market.

In 2006, China increased the export tax levied on aluminium from 5% to 15%. Following this tripling of export costs, the dynamics of the aluminium arbitrage trade completely changed. Semi-fabricated aluminium products, which are export-tax exempted, became the export product in place of primary aluminium. As a result, the underlying commodity no longer had the same characteristics as the primary aluminium contracts traded on the LME.

The frequent adjustments to the import tax levy have complicated the calculations in arbitrage trading further and participating parties must account for any differences incurred over the period of the trade.

Marked depth and trading volume are key considerations for arbitrage

The higher the number of participants and the higher the volume of transactions, the better arbitrage can work. The more liquid a market is, the easier it is to exit a position when needed. This will help prevent the possibility of one leg of the arbitrage trade being “stuck” due to low liquidity in the market.

It is commonly recognised that arbitrage opportunities for tin (and to a lesser extent, nickel) between the LME and SHFE can be limited because there is a liquidity mismatch. A small group of industry leaders could significantly influence the markets and structural tightness in physical stocks could lead to price divergence from true market conditions.

Differences in trading rules and regulations can be challenging

The LME is a mature, developed market with long-established practices, which currently do not include limits on daily price movements. SHFE has price-move limitations in place to dampen excessive volatility. In extreme circumstances, SHFE will cease trading once the daily price limit has been reached, while the LME prices will remain active. This can result in “execution” or “legging” risk, meaning traders face uncertainty about completing their arbitrage portfolios.

For example, on 19 March 2020, LME Copper crashed nearly 8% to US$4,400 a metric tonne and SHFE hit the 9% down limit soon after the market opened. SHFE then halted trading and the closing price for the May contract was settled at RMB 37,570 a metric tonne, with only 20,500 lots traded.

When position limits are enforced, holders of large SHFE positions may be alerted via email or telephone that they need to close certain open positions in order to meet the exchange’s requirement. This will have to be carried out regardless of the P&L impact and leads to more legging risk for arbitrage traders.

Metals on SHFE and the LME are denominated in different currencies – renminbi and US dollars respectively. China’s foreign-currency policy adjustments have frequently sent shockwaves through the financial markets. Before 2005, China pegged its exchange rate at the level of RMB8.25 for US$1 and trading in a narrow band of +/- 0.5%.

In August 2005, China relaxed this trading restriction, allowing the currency to trade outside of the band. In 10 years that followed, renminbi appreciated by 26% relative to the U.S. dollar. This liberalisation of the foreign-currency policy was considered the first step towards future internationalisation.

As a result, exchange rates have become more flexible, but the central bank still has a considerable level of influence and can, in an effort to prevent excessive volatility, intervene. This adds a degree of complexity when trading the LME – SHFE arbitrage, as the exchange-rate risk also needs to be taken into consideration and managed.

The same underlying metals but with different regional fundamentals

Most of the time the arbitrage window does not last long. Prices normally converge quickly when physical material is shipped from the location where it is in surplus to the location where the demand is higher. However, there are times when a divergence is sustained, as shown in figure 4 below.

In the aluminium market during 2019 for example, there was a 6% fall on the LME while Shanghai experienced a 6.5% gain over the same period. During this period the two markets were driven by different fundamentals. Whilst there was a surplus in the global market, China experienced its first deficit in years due to a number of unanticipated supply disruptions. The short-term deficit was a good opportunity to de-stock existing inventory within China. As a result, there was no need to source material from the international market.

Without continuous trading, the price correlation can become skewed, returns can become less symmetrical and the downside risk cannot be effectively mitigated. This can also happen during UK bank holidays and Chinese holiday periods, particularly the long holidays in February and October. This may explain why traders will minimise arbitrage positions ahead of any long holiday periods.

Launched in 2013, the night session on SHFE enabled Chinese market participants to access the domestic futures market when the LME is trading. Because of these continuous trading hours, information from global financial markets can be incorporated into the futures price in China at night. Traders in China can absorb and react to new information, and can therefore better manage their risk.

Due to the unprecedented situation presented by COVID-19, SHFE temporarily closed its night sessions.

The concept of arbitrage sounds easy; where you simultaneously buy low and sell high the same underlying commodity in different markets, and on different exchanges, to achieve profit.

But, as we have seen, the LME – SHFE arb, with all its unique characteristics, is hardly risk-free. Understanding these risks, comparing them to the opportunities and making the correct calculations are a must if any trader is going to capitalise on the LME – SHFE arb.

If you would like to find out more, please email our Head of China Sales and author of this piece, Yang Liu.

LME Aluminium: West to East as Asian Influence Rises
LME and CME Copper Arbitrage: When Global and Regional Prices Meet
The Asian Connection: How do London and Shanghai Markets Interact?