Copper trades actively on both the London Metal Exchange (LME) and the Chicago Mercantile Exchange (CME), which has long given rise to a popular strategy for traders who arbitrage movements between the two markets. However, the fundamentals of physical delivery underpinning both contracts means that an evolving price differential should exist between the two exchanges. A strong divergence in recent months might point to the possibility of trade duties being imposed as well as other structural differences between the bourses.

Both copper contracts are physically settled, so that metal may be delivered or received in the respective exchange’s warehouse network to close the position (on the LME this is on the prompt date). Copper on the LME may be settled by delivering or receiving a warrant in respect of copper in any of the approved 34 global locations . The CME copper warehouse network, on the other hand, is limited to just US locations, which makes its copper price more US specific. Therefore, the LME-CME Copper arb can be found to typically correlate with the regional US premiumii. 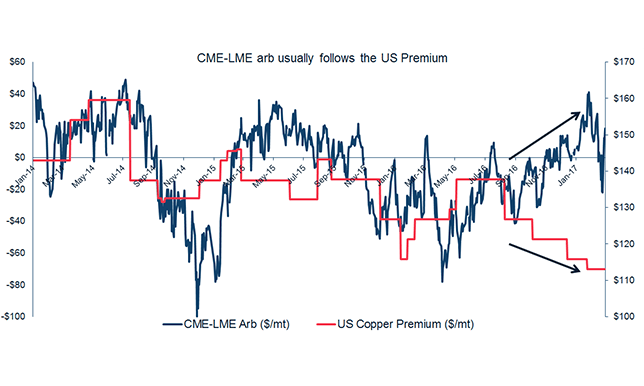 When copper prices rallied 20% in November 2016, both exchanges experienced high trading days and the CME-LME arb was tightly closed as participants traded both markets. Since then, the arb went on to reach the highest level since early 2014 despite a falling US premium.
The arb on the active CME contract has since reversed, falling in line with the physical premium. However, further along the forward curve the divergence grows. One possible reason for this pricing difference, which is frequently cited in the trading community, is that traders may be anticipating the potential introduction of import duties on copper cathode by the Trump administration. This is important because unlike the CME, LME physical delivery points are specifically listed in duty free zones. Therefore, the expiry of a long position would result in the trader obtaining a metal warrant along with the obligation to pay any applicable duty for it to be imported into the relevant domestic market, in this case the US. 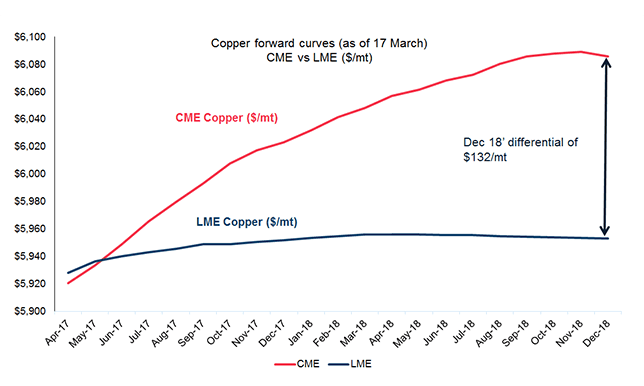 Although other factors do exist that can drive the shorter term arbitrage between LME and CME copper, the underlying and longer term price differential comes down to physical factors. Be it the regional spot premium, or as is currently the case, the possibility of a future influence (i.e. trade duty) on the physical flows between the US and the global copper market.

If duties are indeed imposed, it will be interesting to see if this moves the CME copper price and consequently, affecting the CME-LME copper arbitrage. As of March 2017, the December 2018 CME Copper contract was priced 2% ($133/mt) above the same contract on the LME. Duties above 2% might then require a more significant move. On the other hand, if trade duties don’t materialise or the market loses the expectation that they will, then this forward pricing differential could close.

i At expiry, delivered warrants are allocated by the seller so the buyer does not actually choose the location in which the warrant is received.
ii When metal is bought and sold in the physical markets, it is usually transacted based on the LME (official) price + a premium to reflect the benefit of obtaining metal in a desired region (and potentially ex-warehouse). These regional premiums are added to the LME price are negotiated off-exchange and are surveyed by various metal market information providers.